Want more t-shirts like this one? Give one of these hashtags a spin: And if you're buying this shirt, make sure to take advantage of our TeePublic coupon code to save some cash.

More About This I Want Pasta – Master of None T-Shirt

In Master of None, Dev, played by Aziz Ansari, is seen wearing this I Want Pasta t-shirt. The aforementioned scene happens in the “Mornings” episode of Master of None.

Master of None is a witty Netflix show co-written and starred in by Aziz Ansari. It’s a bit slow at times, but definitely has its high moments. No matter what, it’s a big change from Aziz’s character on Parks and Recreation.

If you want to grab Dev’s I Want Pasta t-shirt, just click the button above to purchase an exact replica from TeePublic. No, this is not the specific t-shirt worn by Aziz in the show, but no one else has to know that!

If you forget the reference, you can see Dev (Aziz) wearing the shirt below: 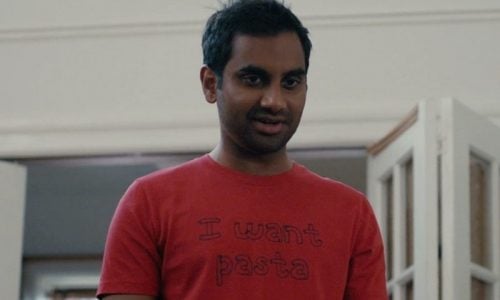